Space A travel is one of our favorite retiree benefits! It’s the military version of ultimate travel hacking.

Although most of the system is run by the Air Force’s Air Mobility Command, the Navy has a few of its own Space A passenger terminals. When you know how to use the AMC Space A system, you can level up your destinations (and your travel opportunities) on both coasts with Navy passenger terminals. 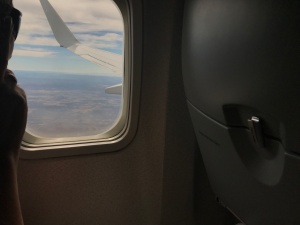 I’m getting a lot of reader questions about how we used the Navy’s version of Space A on our last trip, so here are the details.

In early 2019, my spouse and I logged over 17,000 miles on Space A aircraft. We flew halfway around the globe (from Hawaii to Europe and back). We only paid for box lunches, a military passenger charter tax, and… one commercial flight on our last leg.

We’ve flown Space A for over 30 years, and that last paragraph has become our “normal” slow travel. The unusual part is that we did most of our trip on Navy aircraft and only had one flight with the Air Force’s AMC system.

You can read a quickstart guide to Space A from Poppin’ Smoke and other sites, and I’ve included the best resources at the end of this post.

[Note: This post is written mainly for military retirees. If you’re an active-duty military family then you’re usually under time pressure to get back home before your leave ends. It’s almost impossible to put together the itinerary in this post unless you’re on terminal leave, or unless you’re a military spouse using a command-sponsor letter to fly without your servicemember.]

“Nords, why are you flying Space A anyway?”

I know I would’ve seen this question in the comments:  We’re financially independent.  We have enough money, we don’t need to fly for free.

We fly Space A for the thrill of the hunt and the in-flight amenities. 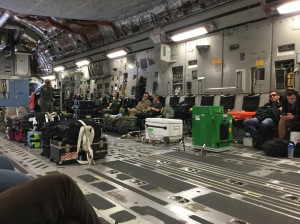 Plenty of room to stretch out in a sleeping bag.

Here are some things you can do on a Space A itinerary:

After 17 years of military retirement (and FI), Space A just feels way cooler. (You’re warned from the very start to be flexible about when you’ll fly and where you’ll land.)  We enjoy it so much that we struggle to remind ourselves when it makes more sense to fly commercial.

Flying Space A as a Military Retiree

I’m going to assume that you already know the basics of the AMC Space A system, or you should read that quickstart post in the Poppin’ Smoke link. Many more details are in the “Related articles” section at the bottom of this post.

[Again, this post is written for military retirees. If you’re an active-duty family who typically flies with CAT III, IV, or V priority, then it’s difficult to put together an ambitious multi-flight itinerary. However, you could try this during terminal leave (at least 30 days) or if you’re a milspouse using a command-sponsor letter to fly without your servicemember.]

Military retirees have the lowest priority (CAT VI) for Space A flights. That’s the way it should be, because we have time and flexibility. Most retirees avoid traveling during the busy Space A weeks of the year (Dec-Jan and Jun-Aug) when active-duty families are traveling.

Retirees can also sign up far in advance of our travel date (usually 60 days) by e-mail. By the time you show up at the passenger terminal, you’ll be among the top names in the CAT VI category and ready to fly anything going your way in the next week. If Space A doesn’t work out then “total failure” is typically a longer stay at your location– or a last-minute commercial airline ticket.

Or you could just monitor the upcoming flight schedule, pack your go bag, and head out for “wherever”. During spring or fall you might sign up for a new Space A list every couple of weeks.

We live on Oahu, so we closed up the house and started our journey from the AMC passenger terminal at Joint Base Pearl Harbor-Hickam. We’d signed up 50 days before (for our 60-day limit) and had 10 days to get to “anywhere on the east coast”. We didn’t know whether we’d make a flight to Norfolk or Charleston so we had our eye on a mission to North Island in San Diego.

Our first travel leg was:

We stayed a week in Norfolk for a family reunion.

After the reunion, we’d originally planned to catch a Space A flight to Rota (Spain) or Ramstein (Germany). When we first deplaned at NAS Oceana, though, their mission board had a once-in-a-lifetime flight the following week to… Amsterdam and Denmark. We’ve never even heard about that before, let alone seen it on a schedule. We signed up on the spot. 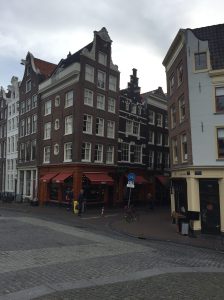 Our next set of flights:

We roamed around Amsterdam from late April through mid-May. We even had several meetups with friends who were passing through on their own slow travel. After you’ve read this post, you’re welcome to browse the public photo album (with captions) on my Facebook page.

We eventually left Amsterdam’s Centraal Station in an express train, and then switched to a local line for a station near the Ramstein Air Base in Germany.  That cost the two of us $293.08 to Frankfurt, and another $81.57 for the local train to Landstuhl. (Thanks to Dan of KeepInvesting$impleStupid.com for dinner and a ride to the base!) Ramstein was the base we were originally planning to fly into with Space A… until we were distracted by the once-in-a-lifetime mission to Amsterdam. 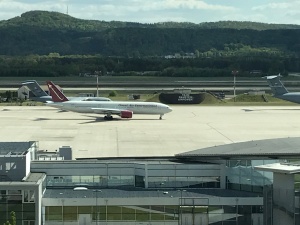 Ramstein Air Base view from our base lodging

(I’m afraid we didn’t do much around Ramstein. Despite our annual immunizations, I came down with an epic respiratory infection and my spouse picked up a nasty case of the flu.)

After a couple days in Ramstein we headed back to the U.S.:
4000 miles from Ramstein to BWI Passenger Terminal on the military’s chartered Boeing 777 Patriot Express. (BWI’s Passenger Terminal is part of the Baltimore-Washington International Airport.) Our $70.66 head tax for two people included the typical civilian in-flight food & beverage service.

After landing at BWI, we completed our Global Entry traveler interviews.  We had filled out the GE applications (and paid the fees) from Honolulu over six months earlier– and we were never contacted for a Honolulu interview. BWI is one of the sites that does GE interviews upon returning to the U.S. from overseas.

When we finished our customs inspection, we asked several staff and were finally directed to the GE office. They looked us up in their database, confirmed our IDs and passports, collected a full set of fingerprints, and asked us whether we’ve ever been arrested. (“Not quite.”) Our GE cards (including TSA Pre-check) were mailed to us a couple weeks later.

We drove from BWI to CampFI Mid-Atlantic (in Spring Grove, VA). After our weekend we carpooled with a friend to Norfolk. The Norfolk AMC Passenger Terminal didn’t have many flights on the schedule so we decided to try flying west from NAS Oceana again. 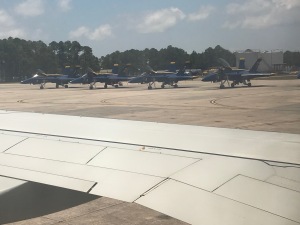 Blue Angels on the flight line.

Oceana’s next flight was four stops, all in one very long 12-hour day:

We spent an enjoyable weekend in San Diego. We were stationed there in 1994-97 so we drove around our old neighborhood and brunched at a ChooseFI meetup before the premiere of the Playing With FIRE documentary.

We were waiting for a Navy C-40 mission:

By that point, we were ready to go home and there were no more scheduled Space A flights for at least three days. We cashed in some commercial airline miles, rode to San Diego’s commercial airport, and flew home on Hawaiian Airlines.

I’ll admit it: I was a tad hypercompetitive about making the entire trip by Space A, so that last-minute cancellation stung a bit. At least Oahu’s welcome-home surf was 8-10 feet on the south shore.

Our final tally was 17,400 miles by Space A, 2600 miles by commercial air, and 300 miles by train. During our two months of slow travel, we flew through 12 time zones. Among box lunches and the head tax, we spent a total of $81.86 on military airfare.

Next, we’ll describe the advantages of the Naval Air Stations.

But first, here’s a funny Space A story:

The Enterprise Rent-A-Car center at BWI uses a different computer system than the tiny little Enterprise franchise in Virginia Beach by NAS Oceana. When we rented the car at BWI, we told them that we’d return the car in Norfolk (and they noted that in their computer system). When we flew out of NAS Oceana and left the rental car’s keys with the Aviation Duty Officer, the VA Beach franchise agreed to pick up the car from the NAS Oceana long-term parking lot… but then they “forgot”.

Two weeks after we returned to Oahu, the BWI office asked me when I was planning to return their car. Enterprise BWI did not talk with Enterprise VA Beach, and vice versa. It took me three more phone calls (and three more weeks) for the VA Beach office to get around to picking up the car. (I had to coach an employee to the car over the phone as they walked the Oceana long-term parking lot.) It took another two weeks for the BWI office to retroactively clear all the credit-card charges and give me an accurate bill.

The Navy’s passenger terminals have their own procedures and tend to be much less formal. It’s similar to using a scrappy local airline rather than a monolithic bureaucratic MegaCorp. If you’re used to the Air Force AMC system, you may be surprised at the Navy’s lack of structure. (You might not even get a boarding pass for the flight.) If you’re in the Navy, then it feels like coming home.

Next, they may have their own rules for passenger lists. Some will only keep you on the list for 45 days. Another may require you to mark yourself present (in person) a day or two before the flight. One passenger terminal is notorious for listing its missions as go times– not the usual show times of 2-3 hours prior to the flight. Before you make any plans based on Facebook information, phone the terminal and try to talk to a human.

Third, Navy passenger terminals may not be busy. Some of them are “black holes” in remote locations with only a couple of missions per week. If the mission is canceled (or the plane breaks) then you may be stuck many miles from a commercial airport… and the local hotel is full on a Saturday afternoon… and the rental car companies close at noon Saturday until 9 AM Monday.

Fourth, it’s absolutely essential to use an app for local base/community info. We greatly enjoy the Take-A-Hop MilSpaceA app, and at $6.99 it’s worth every penny. It’s saved us hours at finding transportation & lodging, and it greatly automates the Space A signup process. But again, call the Navy passenger terminal and try to speak with a human before you make the rest of your plans.

Finally, and most importantly: not a lot of people know about the Navy passenger terminals. You might be the only Space A passengers to show up, and your fellow passengers might all be locals.

Here are more details of the major Navy Space A passenger terminals. Most of this info is found on Facebook (if they’re on FB) or in the Take-A-Hop app.

Other Naval Air Stations are listed on Wikipedia and Military.com. Again, you may be able to research their passenger terminals and policies on Facebook, but call them before you make plans to go there.

Would we fly Space A again?

Our next itinerary starts on 1 September with FinCon19 and Military Influencer Conference in Washington DC, followed by FI Chautauqua in Porto, Portugal. After that we plan to wander the Iberian Peninsula for another 60 days or so. You can stalk my public Facebook page for updates and photos.

Your Call To Action: Before You Go