When you’re starting your bridge career after the military, “Work Rules!” can help you ask a few questions during your interviews.

If the interviewer thinks that the book’s ideas will never work at their company, then maybe you should never think about working there either. Your interview could be over– and the book might have saved you months of cubicle soul-crushing disillusionment.

You have to read this book if: 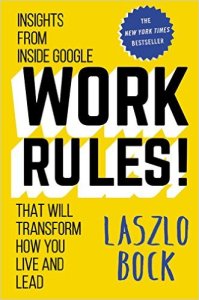 Google’s employee problems began when the founders tried to sell the company in 1998. Larry Page and Sergey Brin liked the freedom of graduate students to work on cool projects, and they didn’t want to run a company. After being turned down twice (by Alta Vista and Excite, for $1M and $750K) they reluctantly decided to grow the business.

They also wanted to hire and work differently, and it’s a good thing they started with that philosophy. During the next six years they hired over 1900 employees by more than doubling the payroll each year. Since the 2004 IPO they’ve hired nearly 5000 people annually, and today the company has over 50,000 employees around the globe.

Like every large corporation, the hardest challenge has been upholding the quality of their new hires. Google is admittedly a popular place to seek a job, but their hiring rate is lower than the military’s service academies and Harvard. After Google’s IPO, their attempt to scale up that hiring process was a miserable failure. Each candidate was subjected to more than 15 interviews over at least six months by the hiring staff. Even Google’s happiest employees hesitated to refer their friends for that gauntlet.

Google eventually developed some of the nation’s best hiring practices because they were desperate enough to try almost everything. Their programmers and engineers fell back on research, controlled experiments, and relentless optimization. As they learned more about the best hiring practices, they worked with psychologists and analysts to develop (and test) their data-driven solutions.

When Google team leaders spend hundreds of hours on candidate interviews, they need to make the right hiring decision the first time. However, author Brad Smith in his book “Topgrading” found that half of all senior hires fail within 18 months of starting a new job. (The “senior hires” group would include military retirees.) Junior hires could fail even faster, or they’d simply add Google to their résumé and move on to a new job. Companies spend tremendous sums on employee turnover, and Google knew that they had to hire as few people as possible for as long as possible.

The answers are straightforward, but the implementation demands constant experimentation. Your “dream company” should hire you through committee interviews with standard questions. You want to be rated on your leadership, conscientiousness (completing the mission), and cognitive ability. You want structured discussions (standardized topics and questions) covering behavioral and situational issues. You want the committee to assess not only your abilities, but whether you’d be a good fit for the corporate culture and the teams. While they’re trying to decide whether to hire you, you should be trying to decide whether they’re still a company you want to work for.

At Google, the interviewers use a proprietary tool to develop their guide. They select the job with the attributes they want to discuss, and the tool generates a set of questions. They can share their interview guide with the committee before meeting the candidate, and everyone understands what the questions are designed to do. Google’s “People Operations” team has optimized those questions for over a decade, and nobody is winging it or depending on their gut reactions.

You won’t hear “Where do you see yourself in five years?” or “If you were an animal, what species would you be?” Instead, you’ll be asked about a time that your behavior had a positive impact on a team and a project, or how you managed a team to reach a goal, or how you dealt with difficult people. The answers are detailed stories with plenty of room for follow-up conversations, and the great candidates soon stand out from the good ones.

Hiring is hard enough, but retention is even more challenging. Google needs to not only hire the best, but train them and retain them. Stock options might work for a few years, but career employees will only stay at Google if they have Malcolm Gladwell’s environment described in “Outliers”: fulfillment, complexity, and autonomy.

Google learned very early that most of their employees are not motivated by money. The engineers knew that they needed money (and their financial advisors told them what to do with it) but the engineers really just wanted to work on cool projects with great people. Many of them feared being promoted out of concerns that they’d have to manage people instead of building great things.

The “work rules” quickly identified people who would behave like founders– and then Google gave them huge amounts of trust and discretion. Even with 50,000 employees, Google managers have far less authority than typical corporate execs. They do not have hiring authority, and they don’t even have promotion or firing authority. The company’s performance assessments are largely crowdsourced while pay raises and promotions are by consensus. Everybody knows who the good team members are, and everyone also knows who’s not so good.

Mr. Bock writes about many other aspects of hiring and retention:

Mr. Bock has never served in the U.S. military, but every one of Google’s practices could be described as “covenant leadership”. Read the book to learn more about translating your military skills and accomplishments into civilian terms.

You’ll also want to read the book to learn the rest of Google’s hiring and retention practices. You may not want to work there, but you’ll want your chosen company to work that way for you.

Related articles:
Starting your bridge career after the military
“If You Are Starting a Small Business, Do Not Expect To Get Paid”
Should You Start A Civil Service Bridge Career After The Military?
Finding Your Military Work-Life Balance
The Transition To A Bridge Career
Making The Leadership Transition
Get on LinkedIn, get a job
During retirement: The inevitable job offers