Since I’m still incubating a half-dozen unfinished posts, I’ll take the easy Monday-morning approach and talk about my favorite subject: surfing. The day after this post goes up, the Oahu south shore forecast predicts at least six feet– and even bigger over the rest of the week. You can find me a hundred yards to seaward of the fenceline at the eastern edge of White Plains Beach on Kalealoa (formerly Naval Air Station Barbers Point). Once again when Friday rolls around I’ll have spaghetti arms, sore quads & hamstrings, a handful of ibuprofen, and a big smile.

This month our daughter was home from college for 18 days, and we managed to go surfing for eight of them. She’s been working out for an entire year with her NROTC unit’s Marine gunny sergeant, so she’s in excellent surfing shape. I was doing fine for the first six or seven sessions, too, but it turns out that my muscles no longer recover as quickly at age 50 as they did at age 18. Two words of advice for you more experienced surfers: afternoon naps.

By the end of the first week I knew I was in an endurance contest against my own muscles. To quell my incipient attitude of “Oh, gosh, surfing again?!?” I decided to give myself a new goal. For the last five years my daughter and I have tried to get good pictures of each other on the waves, but it’s not easy to sit out there in the waves and take care of you, the board, and the camera all at once. So after years of reader requests (and growing skepticism), I finally went and did it: professional surfing pictures. “Professional” refers to the photographer, not the surfer. More about the photographer in a few paragraphs, but first let’s look at the pictures.

No, wait, that’s Ringo the stand-up pup wearing his Doggles and his Outward Hound personal flotation device. He regularly brings his owner down to White Plains Beach, too, and he’s a chick magnet (Ringo, not his owner) with his cool surf-dog gear. (Kids, check with your parents before trying this on your pets!) I’m jealous that Ringo can hang 20 anytime he wants. You can see more Ringo photos here.

Let me try this again: 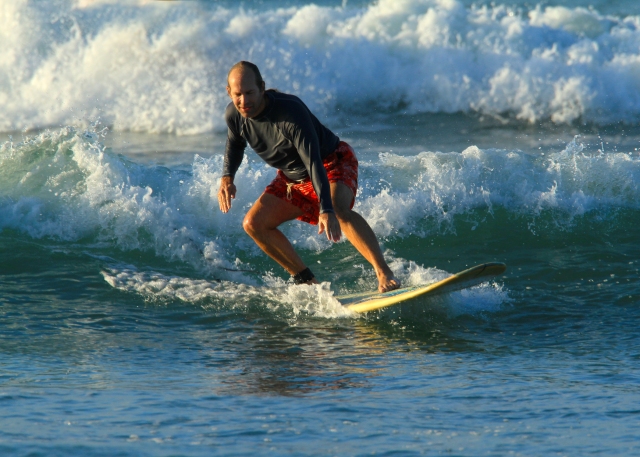 White Plains 2-4 near the shore

These were shot from the beach by professional surf photographer Terry Reis of SurfShooterHawaii.com.  Terry works from the beach or from the water, but these were taken from shore through a lens that looks like a bazooka. He was kind enough to come out for dawn patrol at very short notice (like 7 PM the evening before) and he spent a couple of hours catching everyone on the break. You can see his other work at White Plains here  and the rest of his beaches here.

Speaking as a parent, the key to this photo session was that my daughter was totally back in her Hawaii surfer-grrrl groove and completely comfortable with the waves. We were too far out for Terry to get crisp shots of our bottom turns off those 4-6 footers, but we did just fine playing with the 2-4 near the shore. Normally I’d never get my beat-up 9’0″ fiberglass within two lengths of my daughter’s 7’9″ epoxy custom high-school graduation present, but by this time we were both in control and having fun.

Terry’s website offers a variety of sizes and prints, but we went with traditional 5″x7″s. We made a significant bulk purchase (heck, it took us nine years to get around to this photo session) so Terry threw in the free JPEGs. Of course now I have to get around to framing a few shots on my “I Love Me” wall and adding the rest to our photo albums. Send me an e-mail (or use the “Contact me” box) if you want more information on Terry’s rates, or contact him directly to set up your own personal shooting session. You won’t find anyone else on Oahu with this combination of skill, experience, and price.

I’m going to keep an eye out for Terry whenever I’m on the waves, and I think I’ll buy more shots every few years. It’ll be interesting to see how my style improves over the rest of the 21st century, and to see how long I can keep this up: 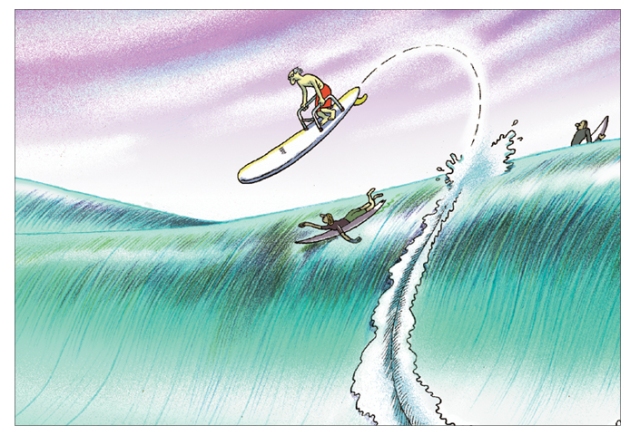 Besides, now that my daughter’s back in college, someone has to keep her board from drying out in the garage rack. (Sorry you can’t be there, honey, but I’ll take care of it for you.)

Back to work on the rest of these posts. (Tomorrow is going to be one busy surfing day.) I’m buffing up topics like Medicare & Tricare For Life insurance, DIY home renovations, more financial management issues for aging elders, the difference between “frugal useful” and “functional hoarding”, the personality types of retirees, and the retirement surprises that come with the first pension check. And of course starting on 12 September I’ll be blogging about “What I Did at the USAA Military Blogger Conference”.